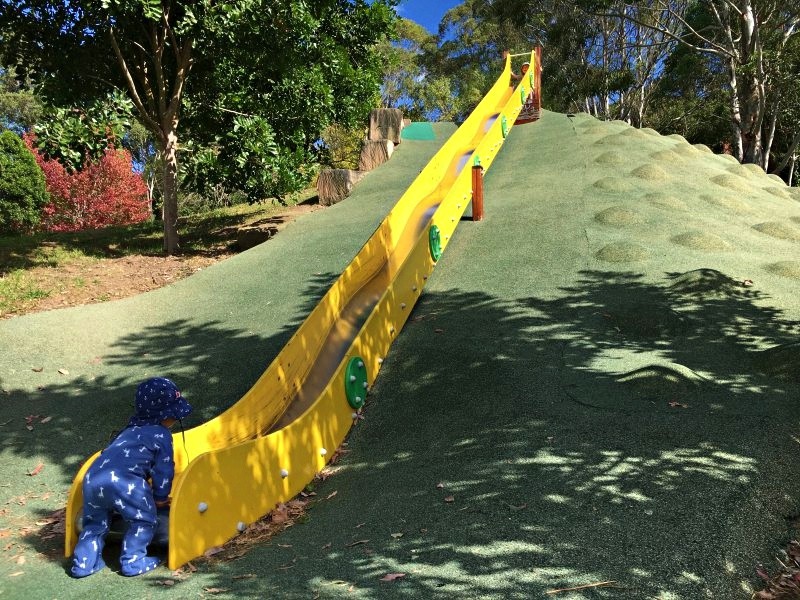 Bushlands Reserve is a little treasure trove of fun. It’s not loud and brash and colourful: it doesn’t shout, “look at me! Look at me! I’m a park.” It’s unassuming – the kind of place you might live around the corner from and never have visited. But looks are deceiving, because on closer inspection Bushlands Reserve is a tonne of fun. 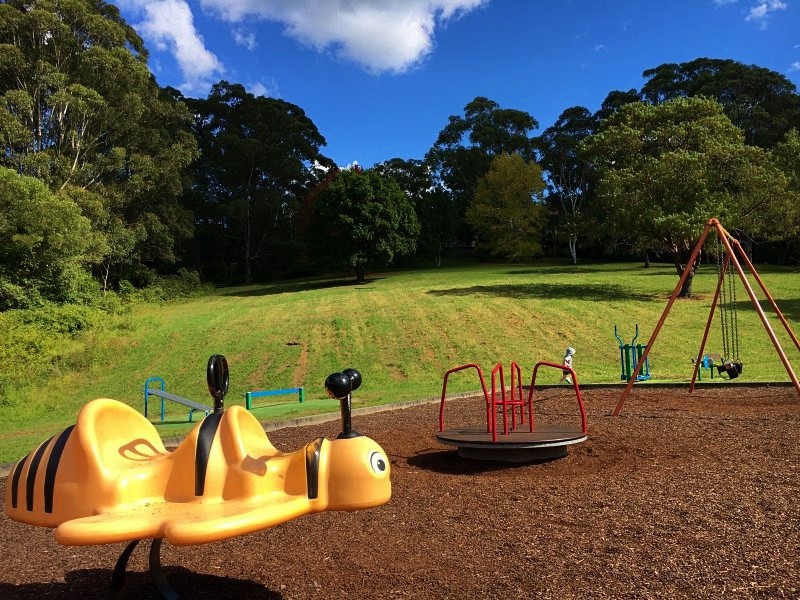 It has swings, a merry-go-round, a flying fox that gives a little less flick than most, a mini bus for tots to “drive”, a rocking bee and exercise equipment (which is mainly used as play equipment). Plus, let’s not forget the crème de la crème, the LONGEST slippery dip on the Central Coast!

Okay, before we go on, let’s just stipulate here that we didn’t call Council to confirm this, nor did we pull out the tape measure… but we’ve slid down many a slide on the Coast and this one definitely elicited the longest “whhhhhhhhhheeeeeee” as we flew down it. It has bumps too, and if you forget to use your shoes as brakes you’re likely to get a little air off each bounce and then fly off the end. The kids may get a little startled the first time they slide down, but they’ll soon be doing laps of the slide and giggling as they superman off the end. The park also has a little bike track that’s perfect for tots who are starting to get more confident on their scooters and balance bikes. 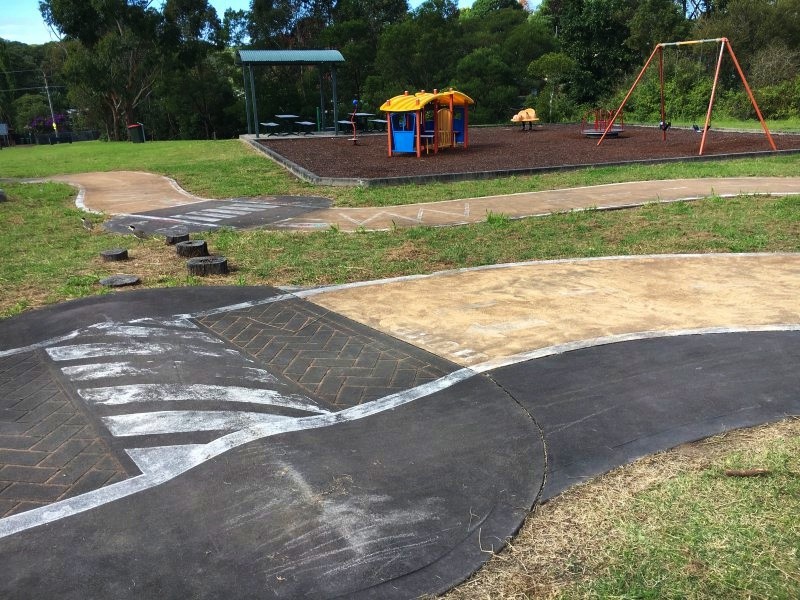 The park has a couple of picnic tables – one is covered. But, sadly, there are no toilets, so if nature calls you’ll be doing a garden wee. 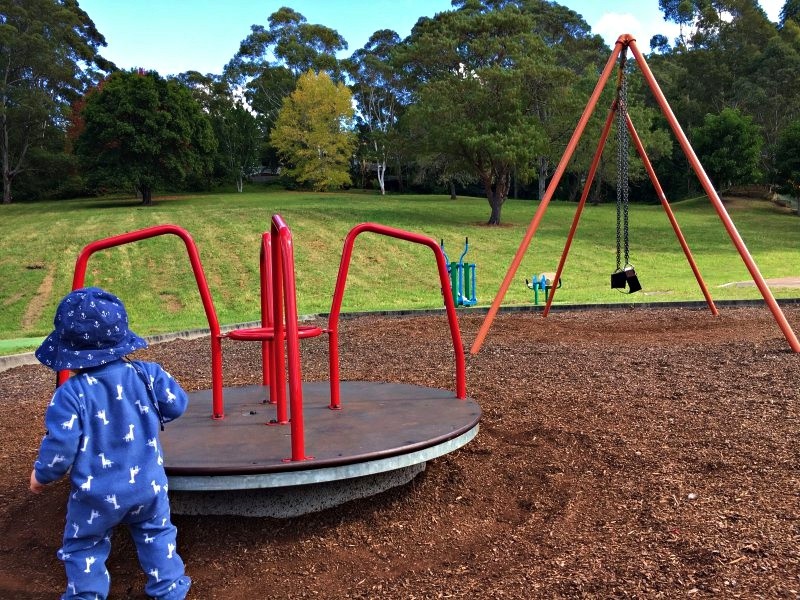 Ages: There’s a lot here suited to young ones aged 1-6, but the merry-go-round, swings, flying fox and slippery dip should keep children up to 12 happy and away from their devices for a little while too. It’s one of the few parks we’ve been tempted to play on as adults (look at that slippery dip: who wouldn’t want to slide down that?), so we think tweens will enjoy it too. 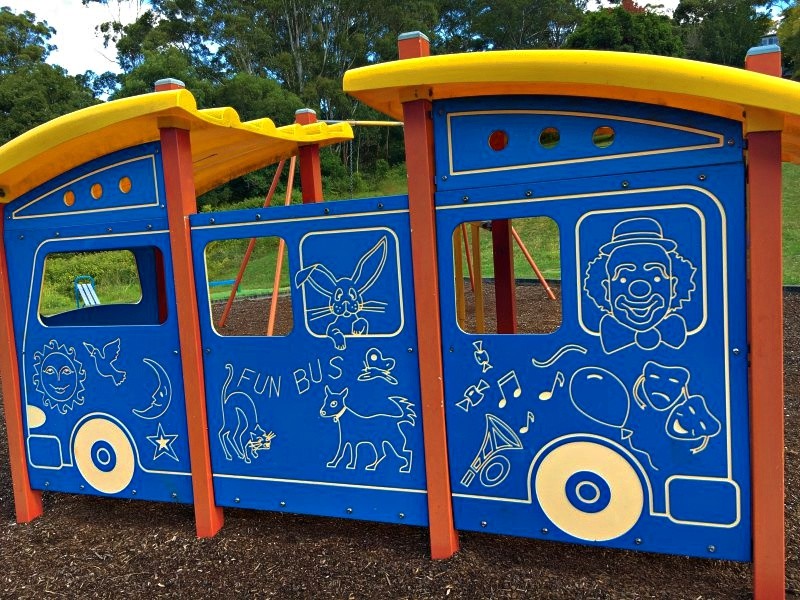 Fenced: No. There is a big grassy area between the play equipment and road, but no fencing. 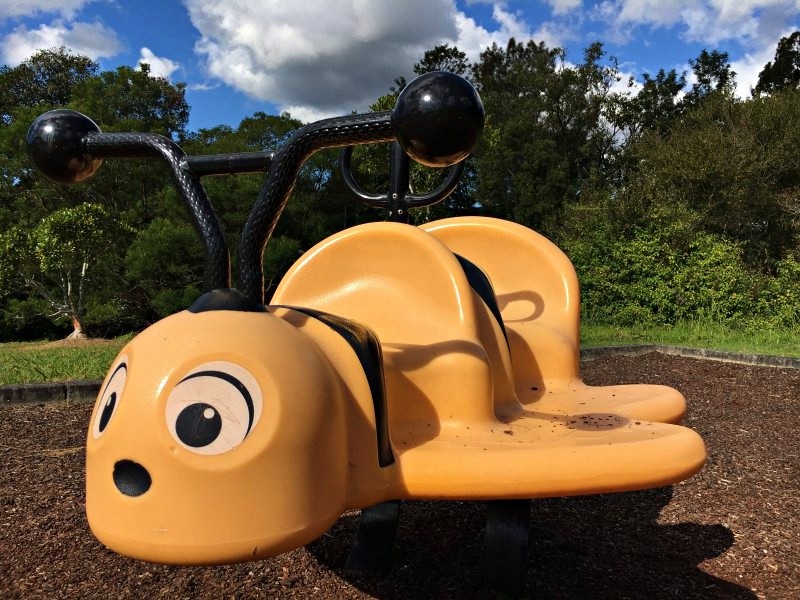 Parking: In the street. It’s a little tricky as the park is on a bend so just be careful getting in and out of the car.

Have you entered our latest competition? Click here to enter. 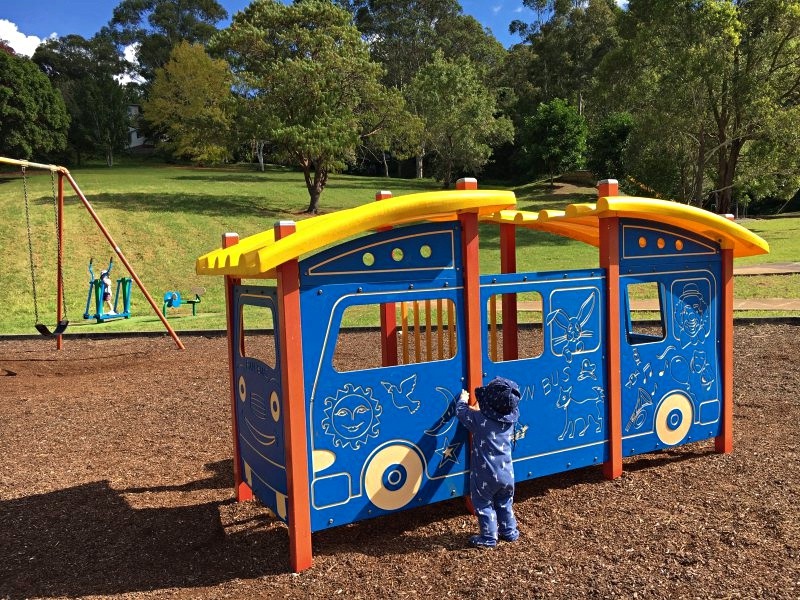 ♥ Arrange a play date. Click on one of the social media icons below to share this review with your friends. ↓

♥ So what do you think? Is this the longest slide on the Coast? If you’ve found a contender we’d love to know about it. Tell us in the comments below. ↓ 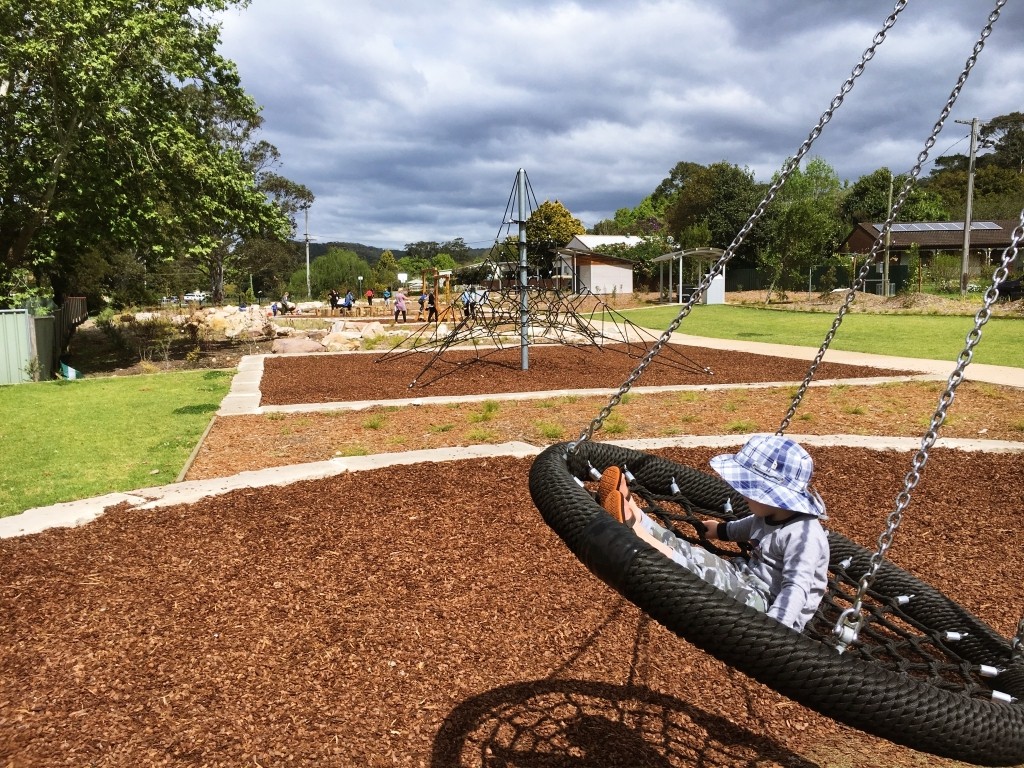 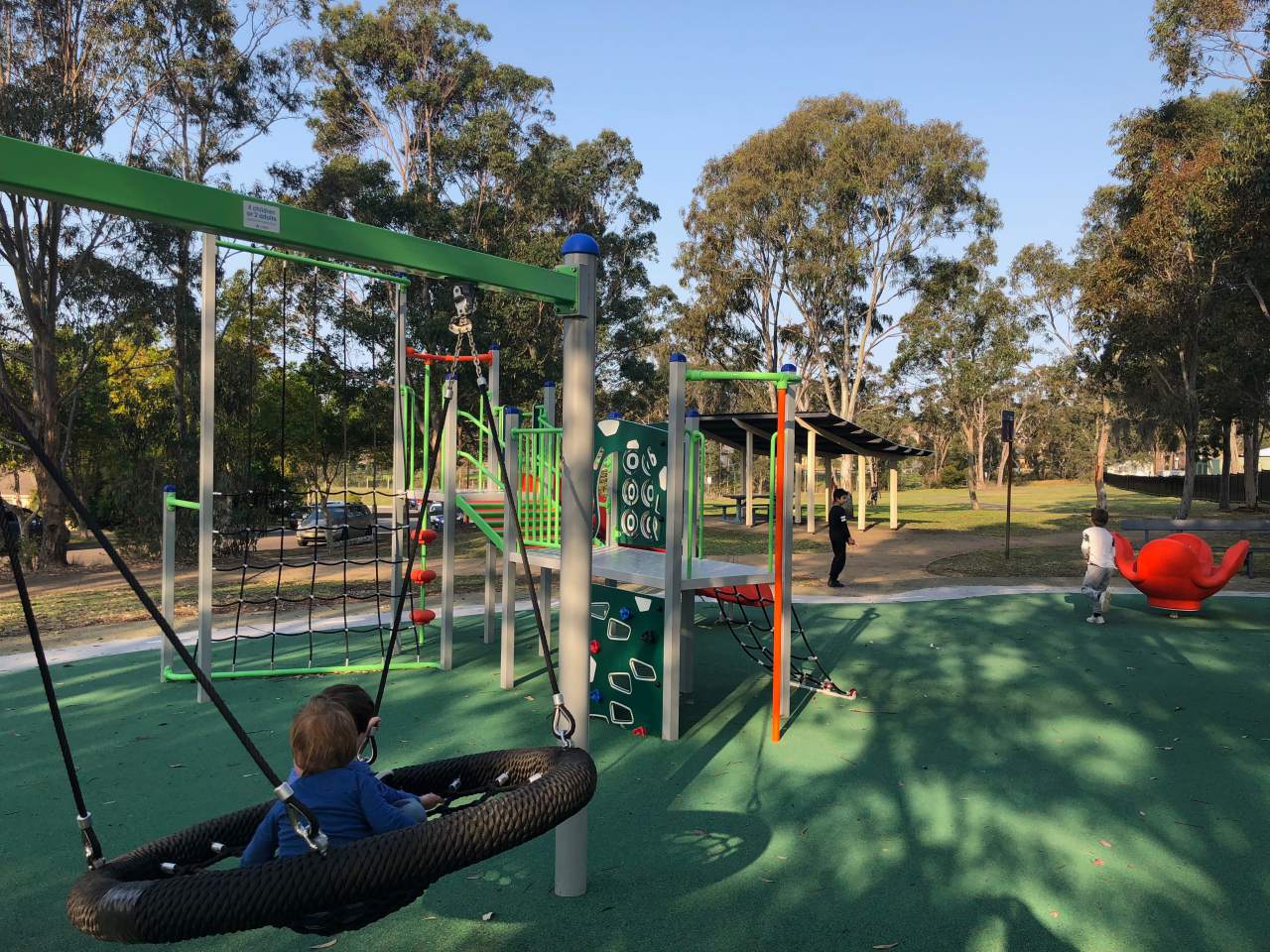 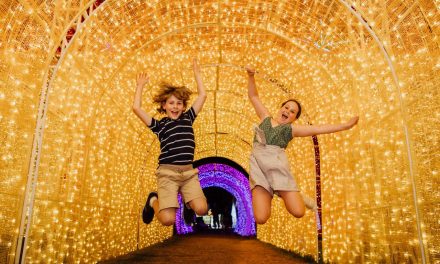 The Christmas Lights Spectacular has Returned to the Hunter Valley Gardens Bigger and Brighter Than Ever! 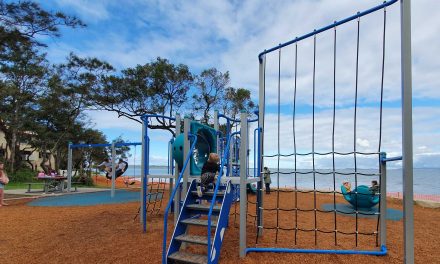 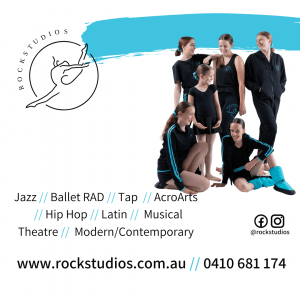 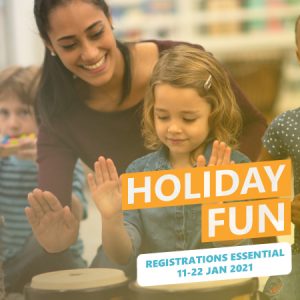 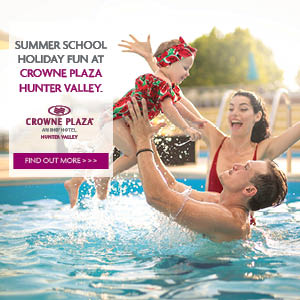 Stuck on you sale